As the U.S. prepares for one of the largest vaccination efforts in history, it's worth looking back sixty years ago, when the country worked to eliminate another deadly virus: polio. One of the most successful campaigns came to life in an Omaha, Nebraska TV studio. 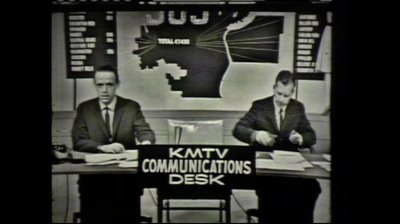 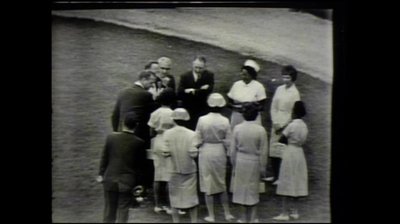 In the black and white film shot at Omaha's KMTV studios in 1962, the event labeled

"If you remember, the Jerry Lewis Labor Day telethons, it had that sort of feel," said historian David Bristow, who wrote about the event for Nebraska History magazine. He was fascinated by the film archived in the History Nebraska audio/visual archives. "They had tote boards with numbers. They were trying to get people excited."

No asked for money during the broadcast, but the goal was ambitious. In conjunction with events being run all over the Omaha metro area, it aimed to distribute the Sabin oral polio vaccine to the entire city.

Murray Longworth, chair of the SOS event, told viewers, "we hope to see half a million people come through these clinics" before the end of the day.

The Douglas County Board of Health organized the program, pulling together Omaha's leading citizens, from captains of industry to the priest in charge of Boys Town.

"I'm looking at the at the film coverage it seemed everyone seemed to be in a pretty good mood," Bristow said.

Poliomyelitis had been the scourge of the first half of the 20th Century. "Polio is a terrible thing," Dr. P.J. Conner told NET News. He led Omaha's St. Joseph Hospital in the 1960s when the facility had one of the region's most complete treatment and rehabilitation programs in the Midwest.

"My brother had it," he said. "I know a lot of people died of it. We had all kinds of people in iron lungs" at the hospital, associated with Creighton University's School of Medicine.

An iron lung encased the entire body, mechanically controlling a patient's breathing. The device became a frightening symbol of the toll it took on its victims, especially children.

"In some cases, it led to it led to death," according to Nebraska's one-time state epidemiologist. Dr. Tom Sefranek.

"It's just heart wrenching to go back and look at the pictures of young kids, under a year or two of age, on iron lungs (and) young kids walking around with leg braces."

The public's fear of polio made conquering the virus one of the world's highest public health priorities.

An injected vaccine developed by Jonas Salk in the mid-fifties was effective. As the 1960s arrived, there was an alternative vaccine. It was an oral dose developed by Dr. Albert Sabin, administered as a drink, or delivered on a sugar cube.

"A lot of these injections are being given to kids, so the sugar cube or (mixing medicine in )Kool-Aid was somewhat of a popular approach to a kid getting the vaccine.

Such an easy delivery system prompted communities across America to promote Sabin Oral Sundays with showy events to get everyone in town on board for polio protection. 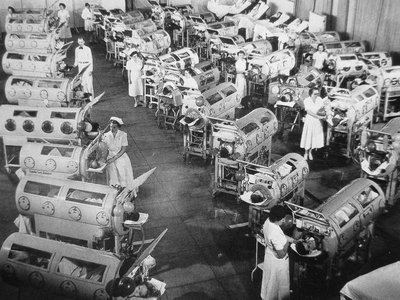 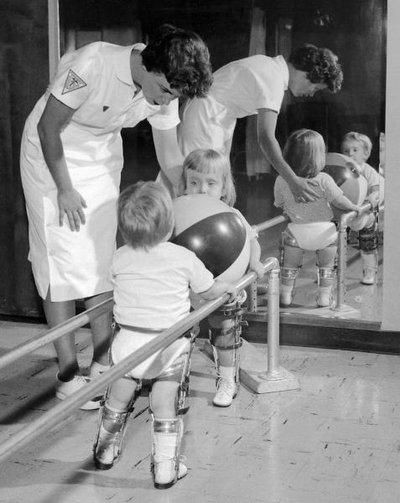 Iron lungs in use in a California hospital (Photo: Rancho Los Amigos Hospital) 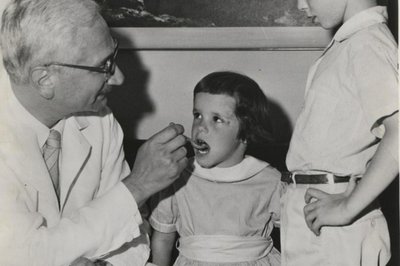 Demystifying the vaccine was also a goal of the SOS events.

"Tastes great!" chimed in the attending physician on the field.

The vaccine was also affordable. Campaign chair Longworth told SOS viewers, the price of the vaccine is 25 cents, but no one will be turned away because of lack of funds," adding if anyone wanted to give more, the volunteers would be happy to receive that to take care of the other expenses."

Omaha Mayor James Dworak encouraged residents to line up to take the medicine, calling the project "one of the greatest opportunities that any of us could ask for: to protect ourselves and our families and our community against the dreaded disease of polio."

"Not many years ago, we Americans had no defense against poliomyelitis," Dworak added.

The entire event, according to Bristow, felt like the Omaha community had "a great opportunity to be rid of something that has harmed a lot of people and frightened many others."

"It did strike me as watching kind of like this, this massive community celebration," he said.

As the day wore on, the turnout was massive. People willingly waited in long lines to take their dose of the vaccine.

Bristow said 'They got nearly 85% of Omaha's population on that first day to turn out for this event, and it's hard to imagine that happening today."

For it to be fully effective, the Sabin vaccine required two additional doses. People returned in comparable numbers each time.

The success of the Omaha effort prompted other communities in the state to mimic the public health drive. Within weeks almost one million Nebraskans had participated.

The global vaccination drive remains one of public health's most satisfying success stories.

"We're doing a good job with polio in Nebraska," says state epidemiologist Safranek." I don't recall a single case of polio since I started here in 1990."

The United States has been polio-free since 1979.

At KMTV studios, the Sabin Sunday telethon remained a source of pride for years.

It certainly provides a contrast to the challenge of dealing with a public health emergency six decades later.