The Nebraska State Fair is celebrating its 150th year, an iconic event that’s includes a rich, and quirky history. NET’s Jack Williams talked to historian David Bristow of History Nebraska to find out how things looked in the early days of the State Fair.

NET News: The Nebraska State Fair is almost as old as the state itself. How did it start and what did it look like back then?

David Bristow: The first fair actually happened before we were a state. We became a state in 1867, but the first fair was held in Nebraska City in 1859. It was an agricultural event. Nebraska City was a very small town, very new at that point. People got to the fair by taking a steamboat if they lived along the Missouri River, by horse and wagon. So it would have looked very crude, no permanent buildings and things displayed in tents. Again, it was very much a farmer’s event.

NET News: The State Fair has been held in five different communities over the years. What was the general philosophy about its location early on? 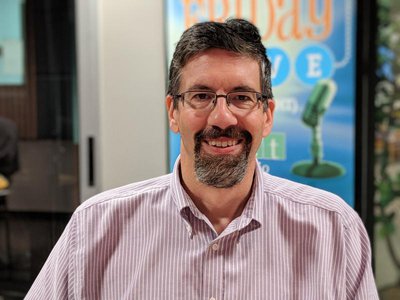 Bristow: I’m not sure why it moved around so much. I think it was just kind of an opportunistic thing. Clearly there was some competition for it. The first two State Fairs were held in Nebraska City and then Brownville hosted it for a few years. You wouldn’t think of Brownville hosting a big event nowadays, but it did back then. But then for many years, for the rest of the 1800’s, Omaha and Lincoln traded off. They had kind of a deal worked out for a while where the fair went back and forth and then finally it settled in Lincoln from 1901 to 2009.

NET News: Back in the early days, the State Fair was a bit different than the event we see today. It wasn’t always exactly family friendly. What was allowed at the fair back then?

Bristow: Until I think it was 1879 when they banned alcohol at the fair and in the early days there were complaints that there was too much drinking and there were indecent shows. I don’t have any more detail about that. What was considered indecent? I’m not exactly sure. But they got rid of those things for a while, but then, starting by at least the 1950’s and 60’s, we have photos in our collection at History Nebraska of burlesque shows. You’re just kind of seeing the exterior of the building and scantily clad women, I mean not indecent, but definitely kind racy, standing outside the building. They were trying to lure men in to watch these dancing shows. And it is a bit surprising because would be right next to the midway and events for kids, so I guess there was a variety of things going on. 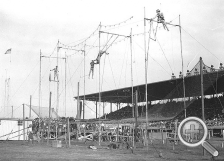 The Flying Millers performing at the 1924 Nebraska State Fair in Lincoln. (Photo courtesy of History Nebraska)

NET News: Nebraska State Fairs have always had an array of unique events, but in the early days, that included airplane exhibitions, auto racing, acrobatics and even chariot races. Tell us about some of those early activities that you probably will never see at a State Fair again.

Bristow: They did chariot races starting in the 1880’s. It was around the time that the novel “Ben Hur” was a huge bestseller. And of course that was later made into movies in the 20th century. And this was sort of a novelty event. It was popular for a while across the country. That kind of fell out of favor as automobiles came in. The first auto race held at the State Fair was in 1900. It was purely a novelty. In the press clippings they don’t give a whole lot of details. They say, we’re having a band from such-and-such and then there will be bicycle and automobile races and that was the extent of it. It was a novelty for many years. By about 1914,1915, it was a serious, regular event with well-known racers and results printed in the paper. But horse racing, that was the big thing for many years. It took auto racing several years to kind of become more than just a crazy stunt that people were doing.

NET News: And there also some aviation history in the early 1900’s at the State Fair. Tell us about that.

Bristow: Not quite the first flight in Nebraska, but certainly the second aviation event in Nebraska took place at the State Fair. The aviation pioneer Glenn Curtiss made the first flights in Omaha in 1910 and just about a month later, a member of the Wright Brothers Flying Team was at the State Fair. The Wright Brothers themselves didn’t fly but they had a team of pilots that were going around the state and actually, I think probably the first air crash in Nebraska happened at the state fair. A pilot by the name of Arch Hoxsey, who had actually spent part of his childhood in Nebraska, his father was from Atkinson, took off and he made several flights at the state fair. But he was flying near the grandstand and his takeoff run would take him past some buildings at low altitude and he got caught in a crosswind and crashed into the roof of a barn and he was badly hurt enough that I’m not sure if he was knocked unconscious, but they said he was unable to talk about the event immediately afterward and went back to his hotel room and fell asleep. 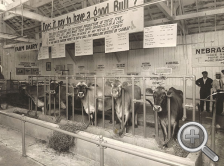 Livestock at the 1905 Nebraska State Fair in Lincoln. (Photo courtesy of History Nebraska)

NET News: The State Fair has been cancelled twice over the years? Why were they cancelled?

Bristow: It was cancelled in 1898. Omaha was hosting that year. That was the year of the Trans-Mississippi and International Exposition, which is late 19th Century speak for the World’s Fair and Omaha officials felt, well we’re already hosting the Trans-Mississippi, we’ll just roll the Nebraska State Fair into that, so no State Fair that year. And then in 1945, the U.S. Government just banned all fairs. As it turned out, by the time that the State Fair would have happened, the war was over. VJ Day had already happened, but they didn’t know that when it was leading up to the event. So those are the two years that we didn’t have it, which is why this year is the 150th fair, even though the first state fair was held in 1869.

NET News: There was a fight in the early days over agriculture vs. entertainment at the State Fair. What was the disagreement? Did the purists think there was too much entertainment?

Bristow: Some of the early organizers, such as Robert Furnas, who was editor the Nebraska Farmer and served as Nebraska’s governor for a while, felt that the fair was primarily and educational event. The idea was that most of the people coming to the fair would be farmers, and most Nebraskans were farmers in the early days, that you would come, and as Furnas suggested in his newspaper, you would bring a notepad and go around and learn who has the best livestock and make contacts and basically learn from the other farmers what they are doing so you can improve your own operation. And the idea that there was also shows and contests and that sort of thing was greeted with a certain reluctance by some of the purists. They felt like this is a big distraction and we don’t want this to become just a show and we certainly don’t want it to become a low-class sort of thing. But the public liked the entertainment events and they expected the fair to do that, and so throughout the years there’s always kind of been this balance of agriculture and education and entertainment. 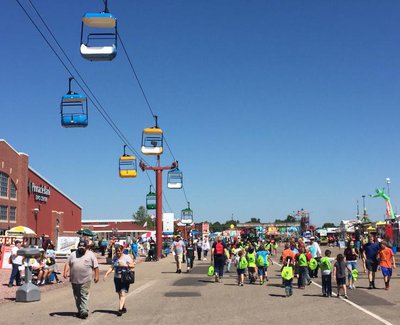 NET News: Lincoln hosted the State Fair for more than 100 years until it moved to Grand Island in 2010. Do you think the move has worked?

Bristow: I think it’s worked out very well. I remember at the time thinking that, not to knock Lincoln, but Lincoln has a lot of different things going on, from Husker football to being the home of state government, and the fair is one thing among a number of things. But Grand Island has really, of course they had Fonner Park and they’ve had Husker Harvest Days for many years, but it’s become this huge point of pride in that community that we are the home of the state fair. It’s worked out very well for them.

NET News: Do you think the mission of the State Fair is changing or is it basically what it was 100 years ago?

Bristow: In some ways, people from the past would hardly recognize certain aspects of the fair. The technology is very different. What people wear in public is very different. You know, in the old days it was coat and tie and long skirts, but the basic function is kind of the same. There’s still entertainment, there’s fun things to do, there’s food. There’s also an educational mission. There are displays. And you look at the fair over the years and it’s in some ways surprising how much that mission has been consistent over the years even as society has changed.