You may know Bill and Evonne Williams for their honor flights. The couple have spent the past ten years taking more than 3000 Nebraska World War II, Korean, and Vietnam veterans to Washington to commemorate their service in the armed forces. But now the Williams are turning their attention to a different endeavor. They’ve designed 25 tribute towers with photos of more than 4000 U.S. Service members killed after Sept 11, 2001. The towers will be toured around the country. Their first stop is in Lincoln at the Pinnacle Bank Arena on July 21st. Bill Williams says the new Remembering Our Fallen National Memorial has been a huge undertaking:

BILL WILLIAMS: “A lot of folks think we just go to the government and the government gives us a list and pictures, and this is easy peasy. It isn't, because there's no list. I can't even tell you the countless hours researching the families to find a family member. For example: If the young widow was widowed ten years ago and now she's remarried on the other side of the country with a different name. It’s Columbo work to find her to ask for the photos of her husband. We also ask for their favorite personal picture. So you’ll have, particularly with marine photos, ones where they’re straight ahead and unsmiling. But then the inset is him with his 4-H calf when he was seven. That’s the emotional part when people see our displays: the personal pictures given to us by their families.”

NET NEWS: “I’m glad you brought up the logistics of something like this. I would imagine it is a rather large undertaking. What about the cost?” 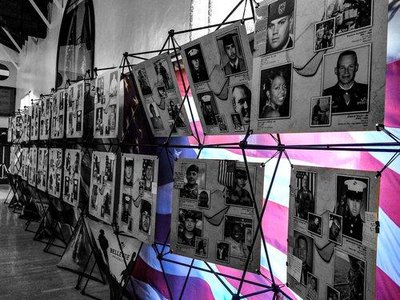 -456th Bombing Squadron Flies Off Into The Wild Blue

-Homecoming: The Impact On Nebraska Veterans

-Special Court For Veterans Aims To Keep Them Out Of Jail, Out Of Trouble

WILLIAMS: “It's been a struggle. The people in Nebraska have been very supportive of our 11 Honor Flights. This one we found is more difficult so we're hoping that people will donate to help us complete this. We're kind of doing it on a wing and a prayer, but it needs to be done because the biggest fear of Gold Star families is that their loved ones are going to be forgotten. It's not World War Two where everybody was involved with scrap metal drives or Victory Gardens. Now, less than half a percent serve in the military so most folks don't pay much attention to the fallen because it doesn't affect them. While if it's your loved one, it's everything."

NET NEWS: “What is it that gets you and Evonne to do this? What keeps you both going?"

WILLIAMS: “We have four sons who were all military at one time. We have one still in the military. He's an Army lawyer at the Pentagon. I think every family member with a loved one in the military can think of the horror of losing them in battle and war. That's why we want to do this for the families because we know some Gold Star families around the country and in our effort honor them. Two years ago we unveiled the California exhibit. California lost the most in the country - 710 native sons and daughters in Iraq and Afghanistan. To put that into perspective, Nebraska's exhibit is 40 feet long, California’s is 240 feet long. We unveiled it at the Ronald Reagan Presidential Library two years ago and we had over a thousand California family members come to the ceremony to see pictures of their loved ones. It's just something that we need to do. We're excited also that once the towers leave the Pinnacle, they're going to go to a fair in Minnesota. Then they're booked into the Cuming County Fair at West Point, Nebraska. Then they’ll go out to the Nebraska State Fair. Then on Labor Day evening, at 7 o'clock when the fair closes, we’ll load the trailer and off that trailer will go all the way to the Lincoln Memorial to be set up on Wednesday evening. We’ll fly out and be there along with a bunch of other Gold Star family members. We will set up the towers at the foot of the Lincoln Memorial near the reflecting pool and then the next morning at 10 o’clock we’ll have a ceremony - the national unveiling. They will then move to the Pentagon for the week of September 11th. Thanks to former senator and Secretary of Defense Chuck Hagel for helping us with that. Then they'll work their way north to New York City for Veterans Day and then they go all the way across the country to a big event at the Reagan Library in Simi Valley California. So the beat goes on, the national tour continues. Our goal then is that they'll travel for years much like the traveling Vietnam walls that most folks see."