A proposed overhaul of school funding met resistance from school groups, and a proposal to evaluate the racial impact of various bills got a public hearing.

Briese is proposing a state constitutional amendment that would say the state has to pay for all “classroom expenses,” as defined by the Legislature. He said that’s about 65 percent of all school spending, and would require at least another $160 million in state funding.

The proposal was supported by Merlyn Nielsen of FAIR Nebraska, a group of ag land owners trying to lower property taxes. Nielsen said the proposal’s consistent with wording already in the constitution.

“Article VII, Section 1, says the Legislature shall provide for free instruction. If we take that as the first premise here, the overriding starting point, then we pay for classroom instruction,” Nielsen said.

Bruce Rieker, representing the Farm Bureau and half a dozen other ag groups, also supported the proposal, although he said the groups would rather have senators address the issue than sending it to voters, as a constitutional amendment would require.

Kyle Fairbairn, representing a coalition of large and small school districts, administrators, and the state teachers’ union, opposed the proposal. Fairbairn questioned whether it would lead future senators to take away schools’ ability to levy property taxes, and whether there would be enough state tax revenue to fulfil the proposal’s promises.

“Would the property tax still be available in the future if we did something like this? Or would the Legislature come back and look at property taxes again within what school districts could do? The other issue we’re concerned about is just the overall cost,” Fairbairn said.

Sen. LouAnn Linehan asked Briese about the reservations to requiring state funding expressed by the opposition.

“Don’t you hear frequently from (the) education community that the reason property taxes are so high is that we’re not picking up our fair share?” Linehan asked.

“Yes. I am somewhat bewildered by the lack of interest on the part of the education community to this proposal,” Briese replied. 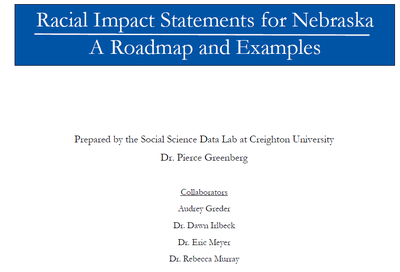 To see a report and examples of racial impact statements from Creighton University, click here.

Vargas said, for example, with African Americans and Hispanics making up a disproportionate share of prison inmates, it would be important for lawmakers to know a proposal to stiffen penalties would also have a disproportionate impact on those groups.

But he stressed the information would not be a policy recommendation.

“It’s incredibly important that the information contained in these racial impact statements is not seen as political or partisan or a policy solution, much like we view all our fiscal notes for all of our bills as the Legislative Fiscal Office’(s) best estimate of the cost to our state’s general and cash funds, and not as a commentary on the quality or idea of the legislation,” Vargas said.

The committees took no immediate action on either proposal.