"We're trying not to focus on the anger." --Carrie Herrera
Carrie Herrera displays a plaque with Mario's badge number on the front door. (Photo: NET News) 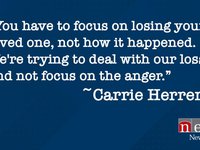 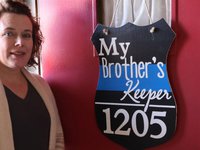 Through the funeral for Lincoln Police Investigator Mario Herrera, the family was "mostly numb," finding the real peace in days spent at his side in the hospital before his death. So recalled his wife, Carrie, during an interview last week with NET News.

She said her husband held on long after the medical team expected him to survive, giving the family "10 days for the kids and I to see him and to be with him."

Carrie Herrera put herself in the public eye by offering to serve on the city's Police Advisory Board. The city council approved her mayoral appointment this month. 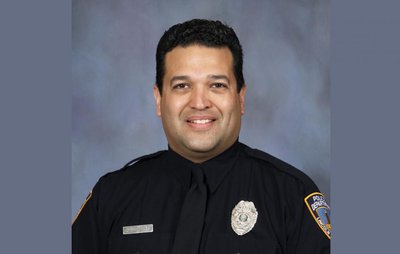 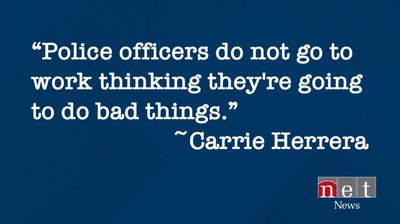 Click HERE to listen to Part One of the NET News interview with Carrie Herrera. 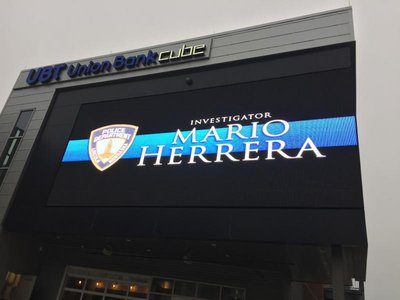 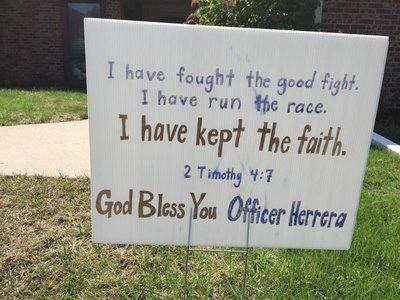 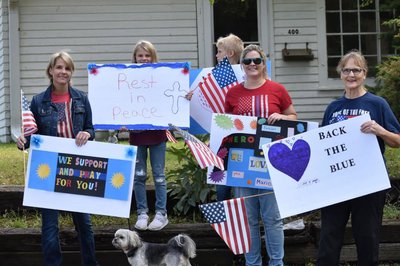 Mario Herrera died in the line of duty, serving as a Spanish-language translator during a tense attempted arrest in the summer of 2020. The 17-year old suspect pled not guilty to murder charges and awaits trial.

In the second of a two-part interview with NET News reporter Bill Kelly, Carrie Herrera spoke of the risks of police work and the struggle to deal with private grief after a public tragedy.

Bill Kelly (NET News): Did you and Mario talk about the risks of the profession?

Carrie Herrera: When we were first married, I was probably more worried about it, thinking my husband's going off working nights and something's going to happen. Then we had kids, and you're (thinking) it's just a job. He goes to work every day. After 22 years of this? Absolutely not. Nope. I did not think this would ever, ever happen. I didn't think it would ever happen in Lincoln, Nebraska. Absolutely not. Eleven-thirty in the morning, when Mario is going to translate. No. I didn't. You are never prepared for it.

Kelly: One of the differences between a tragedy for the rest of us and somebody in the law enforcement community is this becomes a public matter immediately. How do you deal with the fact that (the murder of a police officer) becomes a matter of public discussion, public concern, and public grieving right off the bat?

Herrera: As soon as this happened, I was very secluded up at the hospital. My kids and I, we were just with Mario. I didn't look at any social media at all did not watch the news. The officers and my brother, my sister, would come in and tell me the amazing things that were happening in the community. All these things were happening for Mario, but I really tried to focus on just us.

(To better treat his traumatic injuries, doctors at Bryan Hospital transferred Mario to Nebraska Medicine in Omaha. When he passed away, the family left the hospital together. Later a police escort brought him back to Lincoln with an honor guard motorcade. Thousands of people lined the route between the two cities.)

Herrera: I knew it was going to be hard coming into my house, coming home for the first time. I hadn't been home since the day it happened, and I wanted it to be just us.

We did watch it on television. And I mean, I cried. I was crying the entire time because it was so touching, helpful. I look back that it absolutely helped me knowing that so many people cared about Mario (and) about the situation. Not just Mario, because they didn't know Mario personally, but they cared that he was a citizen, a police officer, who died in the line of duty, trying to help the community, and they're doing this for him.

Kelly: Can you talk a little bit about how your faith helped you deal with this?

Herrera: My faith got me through this. It's still getting us through it. People kept telling me that I would be angry with God for this happening. I'm not. I was more angry at the timing. Why not 20 more years for us?

Prayers have absolutely gotten us through it. I've told the story that after Mario died, we came home. People were over at our house. Everybody left. The girls and I were in on my daughter's bed, just lying there talking. Kind of an odd feeling, but I thought, 'wow, why am I so at peace?' This was his first night of being here by myself without Mario, and I come to find out that St. Teresa was having a vigil l for him that night. Unbelievably beautiful. We had so many people praying for us. I 100% believe that's why we got through the first night. So many people were praying for us, and somebody was wrapping their arms around us, just making it okay. God's carrying us through this.

(The funeral service at Pinnacle Bank Arena for Investigator Herrera became an epic event with hundreds of mourners, representing law enforcement from all over the Midwest. Hundreds more watched from home.)

Herrera: I really truly did that (agree to a public funeral) for the officers because this is hard on them too. It's horribly hard that they lost a member of the blue. So, we really truly did that for them. Because I wanted them to experience everything too. But as for our family, we were very numb.

We truly got to say our goodbyes with just him. Just us. So, in that aspect, when going back to helping somebody, I would say if you have to do what we did and have a large service, which you should, have your own time with that like we did beforehand. Absolutely.

Herrera: Oh, he did.

Kelly: You saw that?

Herrera: Oh, gosh. Yes. I'm 100% sure he did it for us. He did die. His heart stopped right before we were even at Bryan (Hospital's emergency room). And he came back. Then he gave us those ten days for us, for the kids and I, to see him, to be with him, to hold him, to kiss him. I said I probably kissed him on the forehead more than I've ever kissed him on my in a month easily just because that's what you do. I wanted to be close to him, and so he did that for us. I, without a doubt, think he did that for us.

Kelly: It was a gift.

Kelly: What do you want people in Lincoln, Nebraska, to remember about Mario Herrera?

Herrera: I want them to remember to lead by example. That family is 100% important. Faith is 100% important. And just simply being compassionate with people and loving everybody for their differences. Mario had a rule in our house with people with family. You don't talk politics, and you don't talk religion in the house. He was one that you could agree to disagree with him, and he would be perfectly okay with it. And that's what you have to do. And I think if anything, right now, just agree to disagree and take that from Mario.

Editor's Note: Segments of the interview were edited and the sequence of questions altered for brevity and clarity.